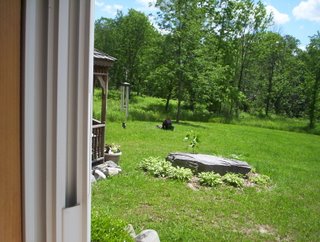 Yes, my new buddy is hanging out 'til the food is gone.

He reminds me of a story I wrote last year. I'll share....
Camp Demolition

“Danger! Danger! Danger!” the cry of the blue jay called. Swooping to and fro, in and out of leaves, the bird excitedly warned others of the intruders. “They’re baaaaaaaaaack!” he screeched.

Along came a Jeep load of hikers jarring the beautiful crisp, clean morning of serene calm. Dust flew everywhere as the squealing brakes brought the vehicle to a stop in the clearing.

Rabbits scurried all over the place. Squirrels dropped their loads and scrambled up the mighty oaks. A doe and her young leaped away through the tall golden grasses.
The hikers climbed out.

With great stretches their agile bodies moved once again after the long drive. They tossed out their tents to be pitched later and readied their gear for the trek up the mountainside. The group headed for the trail and soon peace was restored.

Warily, the blue jay darted out from his hiding, perusing the disturbed area. His glittery gaze roamed to find something shiny or edible.

The doe and her fawn wandered back to grazing, keeping a careful eye on their surroundings. The rabbits, with their insatiable love of clover, nibbled once more.

Behind the fallen tree, another watcher lazily viewed the scene with interest. A bit braver than the rest of the woodland creatures, he cautiously moved forward towards the camping area.

“Hmmmm” he muttered curiously. He sniffed and pawed through the pots and pans. The zippered bags gave him a lot of trouble so he just tossed them in the air. He pushed on the rolled up tent but left it alone after his interest waned.

His attention turned to the unsecured jeep. He peeked inside the open topped vehicle. Seeing no obstructions in his way, he hopped onto the driver’s seat. “Very interesting” he muttered again. “Things are for touching,” so he touched. He pulled. He prodded. He poked.

So absorbed with this new play toy, he was unaware the Jeep had started to roll on the little incline. He must have moved it out of gear.

As the jeep trampled over the supplies, it jarred his concentration. Finally, feeling the movement, he stood up in the driver’s seat and hung onto the wheel. “Oops” he muttered, “I think it’s going to stop real soon.” Out of the Jeep he jumped as it hit the large beech.

Turning, he studied the situation. His head tilted to one side, then the other. Confusion lighted his eyes as the spew of steam from the radiator hissed and sputtered. He raised his paws into the air and muttered “hmmmmm” and walked away, very much unconcerned at the outcome of his adventure.

As he ambled over to the fallen tree for a nap, a commotion could be heard on the trail. The humans had returned! He hunkered down, hidden once more, peering out through the hole in the log.

The hikers stopped dead in their tracks as they entered the clearing. Their eyes unable to take in all the disarray, one by one they babbled until no intelligible sentence could be heard alone.

Creatures can make mistakes, touching others’ belongings. But humans should read the posted signs “Do Not Leave Your Unlocked Vehicle Unattended” and “Wild Animals Are Not To Be Trusted”.

Muttering animals only do what comes naturally. Natural man does the unnatural and reaps what he sows.
Posted by Soul Reflections at Wednesday, June 14, 2006

That was cute, although I'd long ago read the story, it really fit well!

Naughty bear! Love that little one in your yard. I wonder wher his mamma is.