New Words from an Old Text 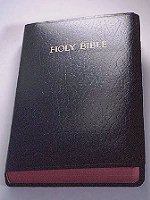 I just recently purchased a NASB (New American Standard Bible) version of the Bible. Experts say that it's the most literal translation of the Hebrew texts. I'm a strong believer in the NIV (New International Version) Bible because it's easy to read and understand. My mind doesn't have to wrap around 'thees' and 'thous'. Neither version that I have has them and the NASB is just as easy to read for gaining insight.

The differences are subtle but sometimes it's the way the text is switched around that plays on my ears with new meaning. They say the Word is 'new' everyday with fresh understanding in the most minute ways.

NIV From the fruit of his lips a man is filled with good things, as surely as the work of his hands rewards him.

NASB A man will be satisfied with good by the fruit of his words, And the deeds of a man's hands will return to him.

Now most people would say that they both say the same thing. I think they do but with a difference of application.

The second part says the same thing, too, only reads with more definite action.

It may be just me. I enjoy reading other versions, but these two seem to speak to me the best.

What say you?
Posted by Soul Reflections at Tuesday, March 21, 2006

I think I'll have to use my NASB more often....since I have it in my parallel Bible I can compare on the fly!