Ya know, I'm getting very tired of the news and politicians these days. I'm fed up with the propaganda fed to us about the war in Iraq.

There was a time that it was honorable to support our troops in their efforts to give freedom to some one else. It was patriotic to be in the military, to serve your country.

There are also people who say we are a country that will disintegrate from within, as most 'empires' have in the past. Sure, we're experiencing a lot of internal problems, mostly of our own making.

One aspect that cannot be denied, is that the MAJORITY of Americans are inherently STRONG, MORAL, COURAGEOUS AND PATRIOTIC. It is an undeniable fact that we can and will rise up together to defeat any threat to our country.

We all want peace and isn't peace worth any cost? Isn't the laying down of our personal lives for the lives or life of another, valuable? Of course it is.

Without the laying down of ONE life for the lives of ALL, we would have no hope of a BETTER life to come. It's what we are all striving for, if we are honest with ourselves.

That's the problem...SELF. The power-hungry want it all. They want control.

But, that's where they go wrong. You cannot control the 'will' of a person. The person has to give up their 'will'. There is no way anyone can do that because they always maintain possession of their will.

One thing about Americans...you can kick us, abuse us, attack us, buy us out, accuse us, threaten us, defeat us...BUT WE WILL ALWAYS GET BACK UP TO FIGHT ANOTHER DAY. And watch out...because the old saying goes: Beat me once...shame on you, beat me twice...shame on me. We don't like shame because we have pride in what we stand for as a country.

Americans still believe that we are One Country Under God. Just take a look at the pictures below, courtesy of Ray "Bubba" Sorensen, artist.

I'm told that there is a huge rock near a gravel pit on Hwy.25 in rural Iowa. For generations, kids have painted slogans, names, and obscenities on this rock, changing its character many times. A few months back, the rock received its latest paint job, and since then it has been left completely undisturbed. It's quite an impressive sight. Be sure to scroll down and check out the multiple photos (all angles) of the rock. I thought the flag was draped over the rock, but it's not. It's actually painted on the rock too. 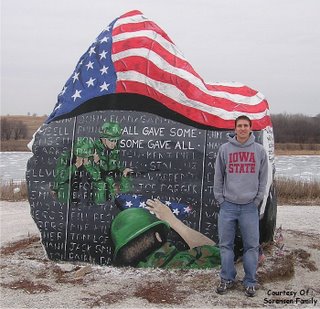 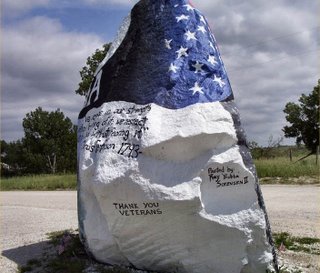 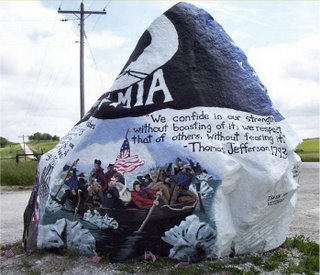 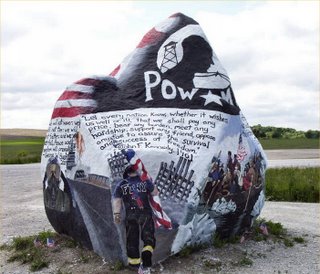 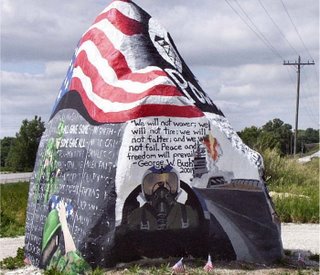 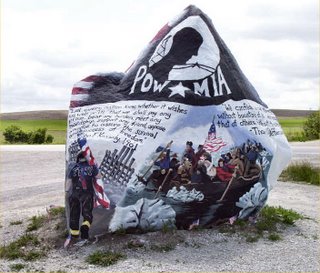 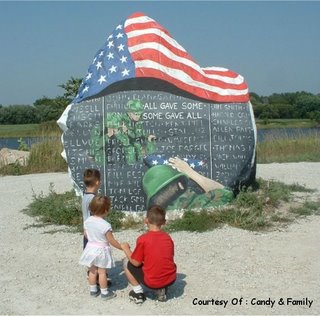 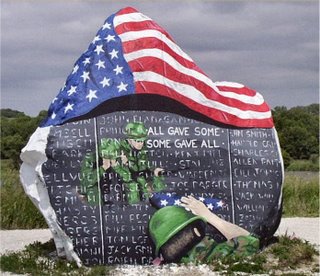